Celebrating our 25th anniversary this fall has caused us to look back on the passing of time and various aspects of the company that have grown and changed. I’ve been with VantagePoint since 1998, which means I’ve seen a lot of changes over the years, especially to our internal marketing. As part of the creative team, I’ve been involved in many of the logo changes over the years. Let’s take a look at how our logo has changed. 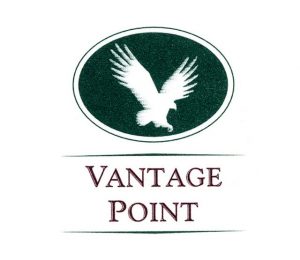 Our very first logo included an eagle, tying it to the “vantage point” symbolism of soaring high with a unique perspective. The eagle represented the elevated perspective that we wanted to convey with our forward-thinking company.

We kept this logo for seven years but ultimately determined we needed a new logo due to current trends. In the late 1990s and early 2000s, the eagle and the forest green that accompanied it were being used in accounting/bank brands. Because of how styles evolved over the years, we no longer felt this logo was an accurate reflection of us and our brand, so we started concepting a new logo. 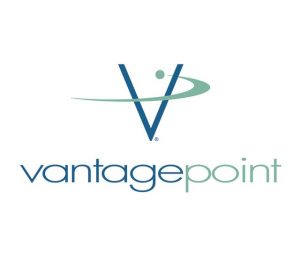 We decided to keep the design for our second logo in-house, and we explored multiple ideas for logo variations. We liked the symbolism that was built into the eagle and considered keeping it, but at the end of the day we felt like it might be a bit outdated. We wanted something clean and sleek as well as something minimal. We also needed to update the typeface to be more modern.

We ultimately chose this symbol of a V and P. It’s clean and simple, but the P isn’t immediately obvious, and we liked that subtlety, along with the represented motion. The colors, blue and green, were updated for new color trends and to get away from that “bank” look in the earlier logo.

Until the mid-2000s, our logo wasn’t well represented within the community. We saw with the increase in digital trends that the need for self-promotion was quickly changing, and we knew we needed to update our brand once more, leading to the 2008 logo.

We didn’t want a full departure from the 2000 logo with this new iteration. We ultimately wanted to update the typefaces and enclose the logo so that it was a more concise unit and easier to include in marketing materials. We wanted it to be more in alignment with the time period.

The evolution from VP to the mark that we use now was intentional. The line that separates the “sky” from the “earth” in the mark was a bit of a throwback to the original perspective approach with the eagle: subtly showing the “vantage point” that we provide.

The biggest shift in this new logo was the incorporation of the tagline. We’d had some internal debate surrounding our name, VantagePoint, and whether it was a clear indication of what we do. We ultimately felt that including the tagline would give additional insight into who are. Up to this point, we’d changed our tagline multiple times, so we decided to semi-permanently hang our hat on a tagline. It was a big step for us.

As you can see, the color scheme also shifted a bit. We kept the blue and green but adjusted them to be more modern and incorporated the orange as an accent color to add some variety.

Ultimately, our current logo is a true reflection of who we are right now. Will we change and grow in the next 25 years? Of course. And we’ll see if our logo needs to change right along with us.

For more reflections on the last 25 years, be sure to check out the best pieces of advice we’ve ever received, and celebrate this milestone with us.