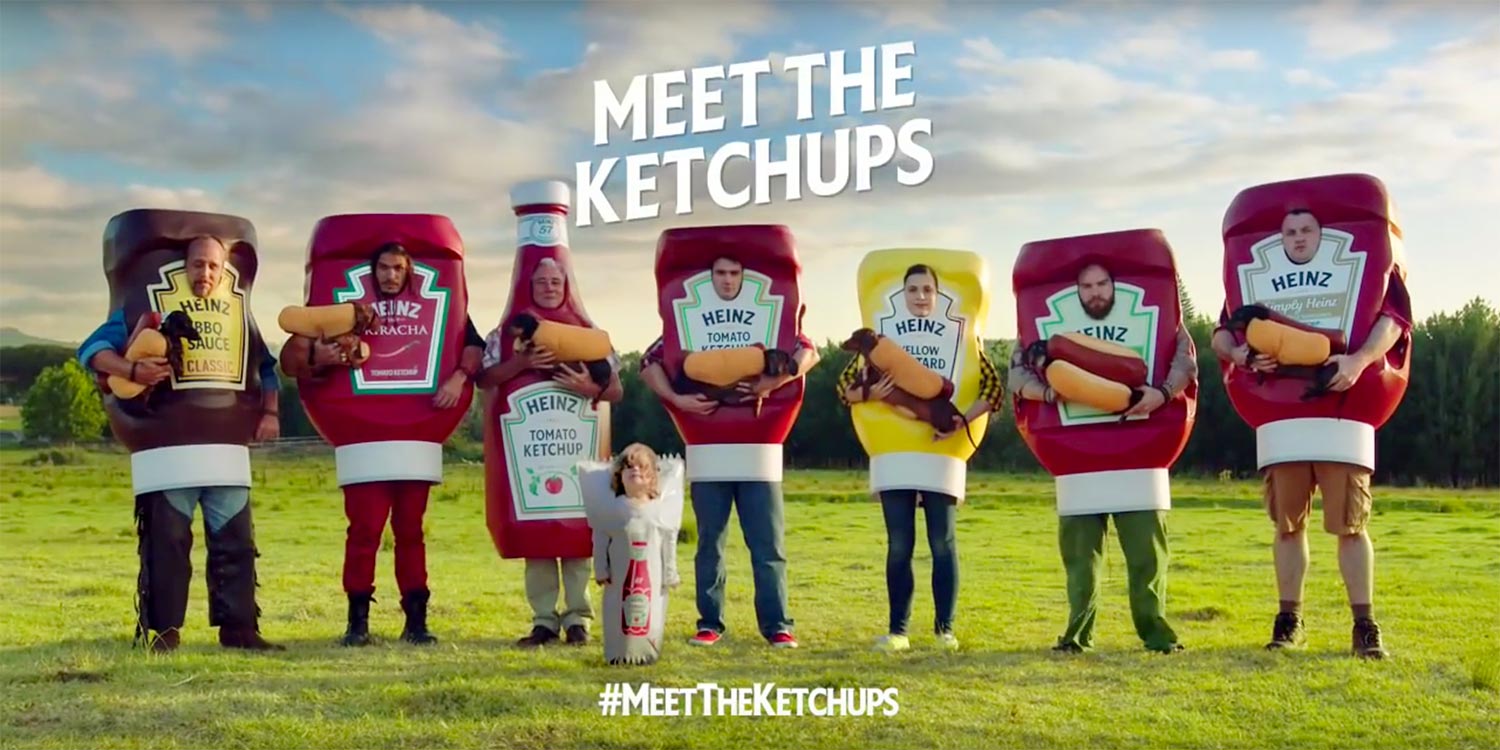 Every Super Bowl commercial, reviewed in 3 sentences or less? Yep. As has been our tradition, I get right to it. Here’s my in-the-moment, stream of consciousness opinion of the effectiveness, understandability and entertainment value of each national ad that ran from kickoff to the final play. (And with “our” team playing this year, I’ll admit it was just a wee bit harder to focus on the commercials than in previous years — but I didn’t go back and re-watch anything.)

Overall, a disappointing year for commercials, and for the outcome of the football game. But, without further ado:

Michelob Ultra. A whole lot of heavy breathing, I guess to show that Michelob Ultra is the beer for you if you work out a lot.

Snickers Marilyn. An effective extension of a great brand point they’ve been pushing for a couple of years.

SoFi.com. Great loans for great people (and a cheese grater — get it?). I guess the “great” point comes across, but it doesn’t differentiate the brand well at all. Any bank or loan service is happy to loan to “great” people.

Avocados from Mexico. Lot’s of nice cultural references, especially the airline seats as a 21st century torture device. Not sure what’s with Scott Baio, though.

Hyundai Elantra. The bears are a clever but not especially original way to tell the story of Hyundai’s remote start feature. I love the conversation between the 2 bears at the end: “I just wanted to hug them/I wanted to eat them/I thought you were vegan?”

Apartments.com. Pretty elaborate, but the whole thing with George Washington and Weezy at the end is confusing. I don’t think the ad was at all effective — why should I use the service, exactly?

Doritos Ultrasound. The plot kept my attention well, and the whole family burst out in laughter. Social media lit up. But will it sell Doritos?

Paypal. “Old money is these people. New money is all people.” Very effective at making the differentiation that the service is a legitimate new way to pay.

Jungle Book movie. Interesting effect with the animals breaking the “walls” of the screen. Looks far more interesting than the animated version (if that’s not sacrilege to say).

Audi R10. A very touching car commercial (is that possible?) with a fictional former astronaut and a great soundtrack homage to David Bowie.

Mountain Dew Kickstart. Monkey baby whatever? Just strange — acting, CGI, writing — all across the board.

Taco Bell. “Bigger than man buns” and Neymar with the “real football” inside joke. Very clever writing and staging. The big sell of Taco Bell’s new Quesalupa, though, gets lost in the quick cuts and jokes.

Marmot. Sortof cute, and sortof creepy. And, unless you’re into outdoorsy stuff, you might not even know what Marmot sells.

Squarespace. The sports-announcer wannabes are only mildly funny, and the ad is only mildly helpful in selling what Squarespace is.

“Talking orange at a bar.” Huh? I would be lying if I said I had any clue what brand the ad was even for. Not funny, and NO brand presence. Total fail.

Buick Cascada. Diving bridesmaids, a football-player groomsmen, and a relatively overused wedding cliche to set up the line “I can’t belive that convertible’s a Buick.” The car is nice-looking and not what we used to expect of Buicks, but it seems a bit overdone.

Advil. Real life videos demonstrating folks doing stuff that cause pain. Not especially clever writing or concept, but a relatively good use of consumer-generated content. The message is definitely clear.

Jason Bourne movie. Explosions, a spy, Matt Damon, and one great-looking sequence of an armored vehicle plowing up a line of traffic. Will definitely catch fans of the genre.

Dollar Shave Club. That is one UGLY-looking razor with some great writing and dialog. I love how the closing spokesperson shows up out of the shower.

Acura NSX. Nice juxtaposition of blue and red and a great soundtrack, all for a car none of us will ever be able to afford ($150,000+).

Rocket Mortgage. Very clearly explains the service, with great writing and interesting imagery (the “wooden leg makers” is a great “craftsman” shot). And the ad then proceeds to illustrate capitalism in 20 seconds. “Push button get mortgage” — you can’t explain things any more simply and clearly than that. My vote for the best ad.

Bud Light. “America has seen the light and there’s a Bud in front of it” says Seth and Amy, along with a few other raunchy or cliched phrases. The farmer who says “emojis” wins the ad, though.

Skittles. Steven Tyler has “minds to twist and values to warp,” but begrudgingly takes time to interact with a Skittles portrait of himself singing “Dream On.” Fun and clever extension of the age-old “taste the rainbow” campaign.

Teenage Mutant Ninja Turtles movie. Didn’t get them in the 80s, don’t get them when Michael Bay remakes them. An awkward pairing of comedy and blow-em-up.

T-Mobile. Steve Harvey embraces his Miss USA mistake with a rejoicing “Verizon got it wrong, not me.” But it’s a bit confusing what, exactly, Verizon got wrong.

Hyundai Elantra. “Warning, here comes your ticket” and “In my face.” Some funny lines for the many, many incarnations of Ryan Reynolds, but it doesn’t help sell the car or the feature.

Astra-Zeneca. An ad for medicine for opioid-induced constipation at 7:50 on a Sunday night on CBS — seems more appropriate for the 60 Minutes audience than for the Super Bowl. But are they onto something here, being so different from all the ads that surround them?

Persil detergent. A leading consumer magazine has apparently ranked Persil better than Tide, and Persil spent a whole hunk of change to tell us that in just as many words.

Coca-Cola. Essentially a 60-second superhero movie for the brand. Well-filmed, but not especially memorable.

Weathertech. American workers in an American factory for an American company. Their floormats may be pricey, but they sure know how to stay on brand and on message.

Independence Day movie. More exploding cities and invading aliens. Imagination seems a little lacking in this summer’s upcoming movies, if those being advertised today is any indication.

Toyota Prius. The getaway car gets towed, leading bank robbers to steal a Prius (which, of course, just never quite runs out of gas). Toyota does a great job of poking fun at the old Prius’ reputation while highlighting the great things (and improved features) of the new model. A super-clever way to demonstrate the attributes of the Prius.

Amazon Echo. Effective at showing what “Alexa” can do with a disparate set of celebrities.

Jeep. Hard to tell when the real people, the movies characters, and the celebrities start and stop, but the ad is an emotional showing of an American icon. Love the tagline: “We don’t make Jeep. You do.”

No More. A stop-you-in-your-tracks PSA to subtly show the dangers of domestic abuse. The dialog-free soundtrack and the simple conceit of a text message make the ad work.

Mini Clubman. True, Minis have a bit of a reputation, and this ad seeks to dispel that for the largest Mini made. But, in the end, I’m not sure I quite get the punchline.

Turbotax. Anthony Hopkins is the perfect actor for “not selling out.” And he can maintain that reputation since Turbotax is “free” (well, until you actually try to complete a return other than a 1040EZ, probably) and he’s not “selling” anything. Gets the point across well.

Pokemon. I’ll admit I may not be the target audience. Inspirational, but not sure what I’ve been inspired to.

Xifaxan. Well, you have to give them credit for creating the cutest animated intestine character ever. That’s about all I can say.

LG OLED. Liam Neeson keeps you guessing — is it a movie ad? A technology ad? An ad for playing cards? Keeps you mesmerized until they reveal it’s for a TV — but the point of the TV gets lost in the dialog.

X-Men Apocalypse. Another ad for another superhero movie. But the haunting soundtrack helps it be a bit better than average.

Quickbooks. An elaborate and extravagant ad for the small business Deathwish Coffee, which Quickbooks sponsors (presumably because they are a Quickbooks customer). I don’t know that it will sell the coffee, but it will probably give the company some notoriety.

Butterfinger. A bull rider jumping off a plane. Bolder than bold? I guess. But it doesn’t make me want a Butterfinger.

Fitbit Blaze. Standard fitness footage, with the slightly clever twist of normal people doing normal daily tasks which then transition into their fitness routine. Still doesn’t immediately tell me much about the device.

Wix.com. Really confusing. Too self referential and bogged down in the Kung Fu Panda cross promotion.

Heinz. An ad full of wiener dogs, literally. Love the “Can’t Live Without You” backing soundtrack and the closing “Meet the ketchups” (except one of them is a mustard). No mind — lots of fun.

Honda Ridgeline. Sheep singing Queen to advertise the brand new pickup truck’s — wait for it — “available truckbed audio”? Is that the only differentiator for this new truck? And the bigger question: why spend all that money on a Super Bowl ad to emphasize such a specific (and frivolous) feature?

Budweiser. A bold and pretty direct attack on craft beers. A few Clydesdales, but no puppies.

Jeep. Catchy tune, great tagline (“4x4ever”), and in keeping with the brand. Effective.

Schick Hydro. Razor bots take over your sink as razors meet Transformers to tell you about the new lubricating strip. Not breakthrough, but gets the message across clearly enough.

Axe. The nose, the beard, the heels, the hair? Well, ok. Interesting.

Kia Optima. Christopher Walken with a sock puppet saying things like “exciting”, “pizzazz” and “it’s like the world’s most exciting pair of socks, but it’s a midsize sedan.” Fun and on-message.

T-Mobile. Drake plays along with the lawyers trying to get him to re-write his song, all to illustrate that the “other” carriers (probably Sprint this time) don’t give you what they say they will. Tells the story well, but not especially unique.

Budweiser. Helen Mirren uses British-accented phrases like “A short sighted utterly useless .. selfish coward” and “So stop it…don’t be a pillock” to campaign against drunk driving. The simple setting and the captivating Ms. Mirren hold your attention, and, hopefully, the attention of those who might imbibe a bit too much and be inclined to get behind the wheel.

Life of Pets movie. I’ve seen most of these clips in the theater previews already, as I’m guessing all of America that has watched an animated movie in the last year has. They could have at least shown some other footage?

Colgate. A pretty simple way to show how much water is wasted if we leave the tap running while we brush our teeth. Very effective, and very positive for the Colgate brand.

Suntrust. Gary Sinise tells us to hold our breath. He says Suntrust is “lighting the way to financial confidence,” but it isn’t clear how. And what’s onUp?

So that’s my summary. My favorite ad? Probably one of the Jeep ads or the Kia ad with Christopher Walken. The most effective ad, in my opinion? Rocket Mortgage. Entertaining and instructive. What do you think?