The Secret’s in “The Sauce” – Recapping McDonald’s recent podcast

The Secret’s in “The Sauce” – Recapping McDonald’s recent podcast 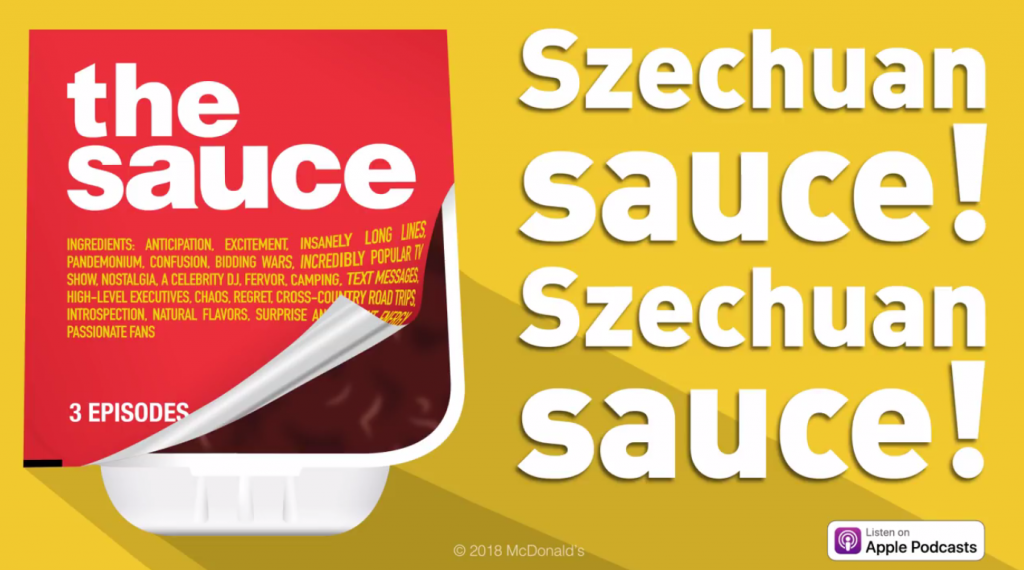 – Despite good intentions, your company made a mistake
– You want to “come clean” while staying true to your brand, which isn’t afraid to have fun
– You need to communicate with the public impacted by the situation and let them know how it will be handled

Did your mind immediately go to “create a podcast” as the solution? Probably not.

A podcast might not be the best approach for every company, but it worked for McDonald’s. The company partnered with Studio@Gizmodo and Onion Labs, to create a three-episode investigative podcast, “The Sauce” ― chronicling the story of what happened when they brought back their coveted Szechuan sauce.

I’ve listened to the episodes, and here are a few of my observations and highlights:

Podcast description: When a long-forgotten McDonald’s sauce gets a surprise shout-out from a popular TV show, the company’s team scrambles to recreate the old recipe that fans are ceaselessly demanding.

Podcast description: On October 7, 2017, McDonald’s brings back Szechuan Sauce for a single day to satiate fans. It doesn’t go as planned.

Podcast description: In the wake of the October 7th sauce disaster, McDonald’s figures out how to learn from their previous missteps and what they can do to make it up to fans.

So, what made this podcast a good communication tactic for McDonald’s? I see a few reasons:

1. “The Sauce” is a great avenue for commentary from multiple individuals, giving it personal touch by hearing from the various players directly ― from McDonald’s corporate team to the couple who drove across the Canadian border to Syracuse in order to try the sauce, and winners of the initial exclusive sauce giveaway.

2. “The Sauce” is a sponsored podcast, and doesn’t shy away from that fact, but they are willing to provide an honest behind-the-scenes look. This approach makes their responses ― and in turn, the McDonald’s brand ― seem more genuine.

3. Capitalizing on the storytelling style used in podcasts like “Serial,” “The Sauce” carries the narrative throughout the three-episode arc in an entertaining and engaging way.

4. The McDonald’s team knew what they were doing in terms of timing. All three episodes released on Feb. 22, creating great buzz leading up to the tee up to the “relaunch” of the sauce on the 26th.

What do you think about this idea? Have you seen any other examples of unique ways to make a corporate statement that doesn’t involve a spokesperson at a podium? Let us know in the comments.

And for more on podcasts as a PR and content marketing tool, check out this blog post, “Three Ways to Capitalize on the Podcast Trend.”