In 2014, Jon Favreau’s “Chef” might have solidified itself as the king of food truck cult films. It’s the story of a five-star chef from L.A. who takes his talents to South Beach to start his career anew as a food truck chef, pedaling Cuban sandwiches across the lower states on his way back to California. As “Rocky” is to boxing cinema, “Chef” is to food truck films.

Way back in 2014, food trucks were certainly trending across the country, but there is little chance anyone saw coming the level of success this industry is having in 2017, which has been unprecedented  — even by Favreau’s standards. And as a reminder he’s been in everything from “Rudy” to “Iron Man.” 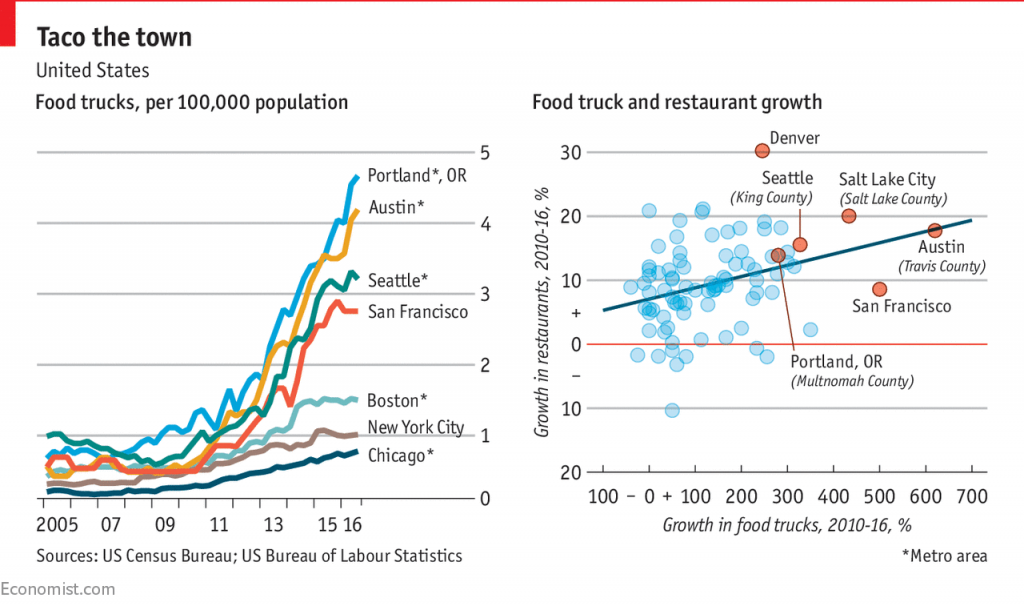 To quantify the success of the industry, in 2012 the food truck game brought in $650 million nationwide. By the end of 2017, this mobile market is expected to come in around $2.7 billion. That’s more than twice the grossing values of “Spider-Man: Homecoming,” “The Wolf of Wall Street” and all three Iron Man movies, all films Favreau had a hand in.

So the first rational question to ask is, “Why?”

When the answer you receive from the general public is, “Because they’re fun!”, don’t scoff. Of course there’s more to it than just “fun,” but as we’re seeing across the food industry, customer experience is becoming more and more of a factor for consumers, making “fun” an important concept. How do we know this? We can compare it to the alternative — eating in.

According to the April 2017 issue of The Atlantic, 2016 was the first time ever that Americans spent more money in restaurants and bars than at grocery stores. We eat out because the experience holds value to us as consumers, and food trucks capitalize on all of the major experience necessities.

We want our food fast. Food trucks are essentially a mobile QSR. We order at the counter and meals are served up within minutes.

We want ambiance. Food trucks go where the party is — a food truck market, a bar, an outdoor event, anywhere people are already gathering.

We want different. Food trucks are beholden to no menu. Since the number of options is usually limited, it makes it very easy to switch up the options regularly. And for consumers visiting a food truck market they can find everything from Mexican to Canadian (poutine truck!) to Asian fusion to southern BBQ.

We want unique. The food truck trend is young. Consumers are still intrigued by the idea of grabbing some food on the go and eating it wherever they like, even if that’s in a parking lot with some friends.

Okay, so they’re fun. Disco was fun too, but that didn’t last forever (although my father would argue it never left). But the “experience” trend isn’t the only one food trucks have adopted. In 2017, and really for the past few years, consumers have become more health conscious.

Technomic’s 2017 Healthy Eating report states that 37 percent of consumers are more likely to visit a restaurant that offers healthy menu items, even if they don’t order a healthy choice. Sure, there are a fair number of trucks that don’t shy from sweet offerings, but “fresh”, “farm-to-table” and “locally sourced” are the buzz words of today’s moving kitchen market. Keepin’ it Fresh, here in Greenville, South Carolina, is one example of a business that fully embodies these new food truck mantras.

The final reason for explosive growth across the U.S. might be the most straightforward. The cost of starting a food truck operation can be significantly lower than that of a brick and mortar restaurant, as are operating costs. With a used truck, a dream, a little automotive and culinary ingenuity, and (by most estimates) just south of $100,000, anyone can be on the road to owning their own restaurant.

And really who doesn’t love a good food truck? Even when they’re bad they’re good. There’s something about eating out of the back of a half school bus, half military kitchen that lights up the taste buds. And for those worried about their effect on the “real” restaurant industry, consider this statistic from The Economist:

Since 2010, the number of restaurants in Seattle and surrounding King County has grown by 16% in spite of a thriving food-truck scene. In Travis County, Texas, which includes Austin, the restaurant count has jumped 18% even as food trucks have increased more than six-fold.

So, why food trucks? Why not.