2018 Foodservice Trend Predictions: Where Are They Now?

Home » Insights » 2018 Foodservice Trend Predictions: Where Are They Now?

2018 Foodservice Trend Predictions: Where Are They Now? 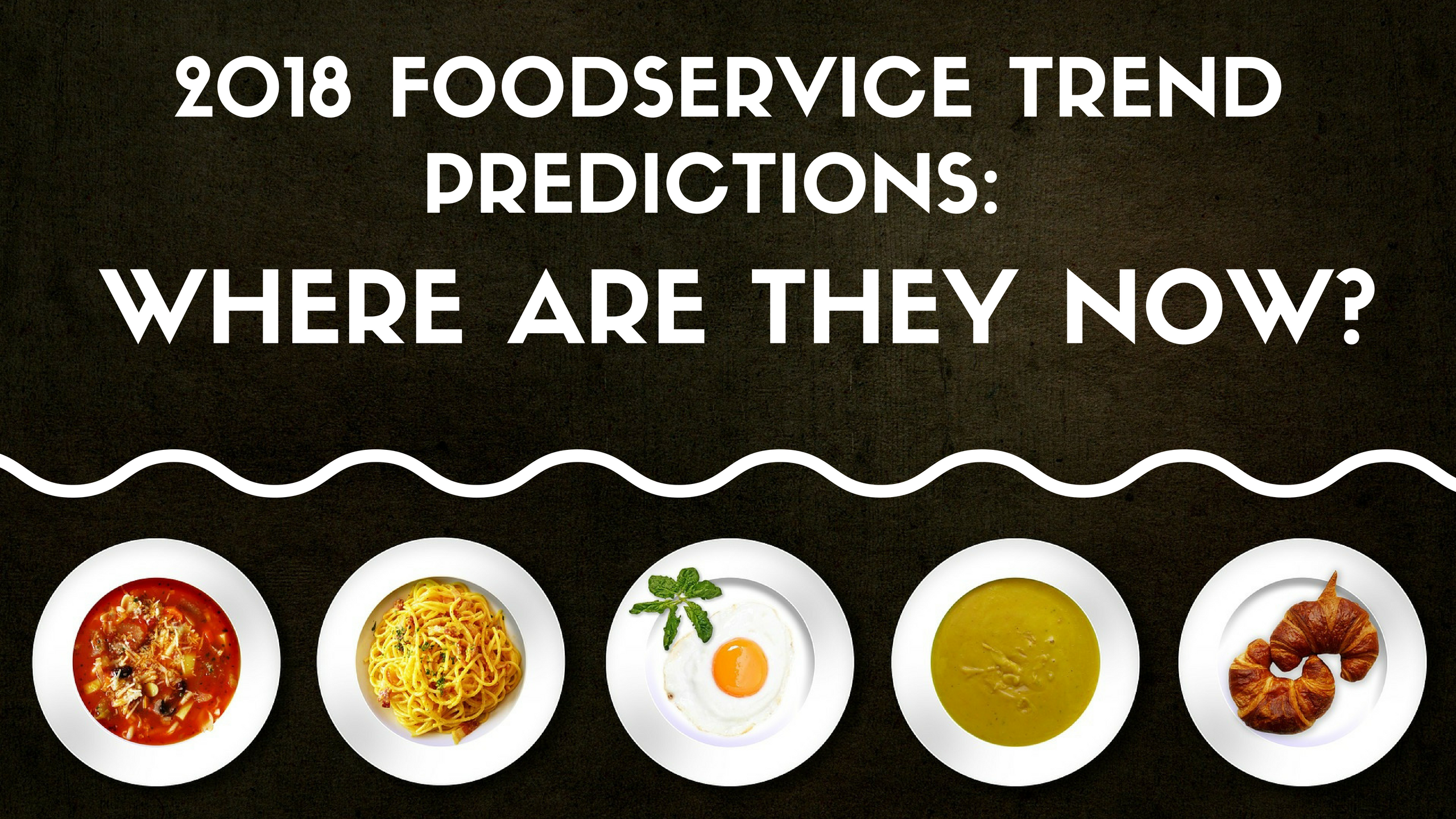 At the end of each year, we’re inundated with foodservice trends on every front. Everyone has an opinion on what will be the next best thing. But do these predictions ever come to fruition? Since we’re halfway through the year, let’s take a look at whether these predictions came true or missed the mark.

Calling chicken a “trend” might be a bit of a stretch, but Nation’s Restaurant News (NRN) chose chicken as its no. 1 pick for 2018. They weren’t the only ones. Many made this claim because of chicken’s popularity among health-conscious consumers. NRN called fried chicken and chicken sandwiches “affordable comfort food suitable for stressful times.” Sure.

So, is chicken trending? All signs point to yes.

Tyson’s chicken sales were up 11 percent in the first quarter of 2018. And its foodservice division has grown to a whopping $12.6 billion.

In other unsurprising chicken news, Chick-fil-A continues to dominate and is poised to catapult over the competition, becoming the third-largest quick-service restaurant in the country as early as 2020.

Poke is a Hawaiian food literally meaning “to slice or cut” but refers to chunks of raw, marinated fish, usually Ahi tuna, tossed over rice. Several publications, including Forbes, predicted poke as a rising trend. Poke restaurants are opening in several locations, and even here in Greenville — a city far from Hawaii — I can find four poke restaurants.

Yes, poke seems to be trending — but for how long?

A Mother Jones article came out this April pointing out potential poke health risks as well as the danger of an imbalance in the ocean ecosystem. TBD on whether the article will slow down poke popularity throughout the rest of the year.

Another NRN pick is the rise in Israeli cuisine. A few specific Israeli restaurants in cities like New Orleans and Philadelphia that received national attention led to these claims. Are we on target for this trend?

Although Israeli cuisine in general doesn’t seem to be trending as much as predicted this year, tahini, a prominent Israeli flavor, is having its moment. Tahini is a paste made from sesame seeds and is now being used in both savory and sweet applications. Its seed base appeals to those with peanut allergies or vegetarian tendencies.

The growth of Filipino cuisine has been predicted every year since 2015, and Forbes jumped on the train this year. Others became a little more cautious, picking “Asian island cuisine” instead. We see you.

But this is one trend that hasn’t quite happened.

Filipino cuisine has received a good bit of critical acclaim, and it’s true that adobo, a Filipino staple, has grown in popularity. However, Filipino food hasn’t quite made it to the U.S. Its growth is slow, and this year will probably not be the year it becomes popular.

Mezcal, tequila’s first cousin, is an agave-based liquor. Bartenders are incorporating it into more mixed drinks, describing it to patrons as “smoky tequila.” NRN, The Spirits Business and basically everyone named mezcal as a drink trend for 2018.

And they were right.

Although mezcal is still a small percentage of the liquor market, its popularity is definitely on the rise. While mezcal is typically imported from Mexico, according to a recent Bloomberg article, other liquor makers are starting to expand to mezcal and tequila products.

Before you jump to incorporate any of these items into your menu (okay, except chicken), ask yourself these three questions to determine if the risk is worth the reward.